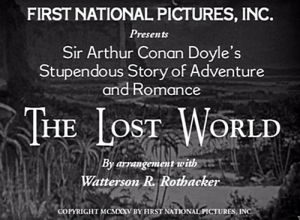 The only silent SF films I’ve ever seen are Le Voyage Dans la Lune and Metropolis. My plan for this series was to review those two and then jump into the 1950s. But Le Voyage inspired me to add a few more early films to my list. The next in line is The Lost World, which notably begins with an on-screen appearance by the great author himself, Sir Conan Doyle, who says:

“I have wrought my simple plan,
If I give one hour of joy
To the boy who’s half a man
or the man who’s half a boy.”

The movie is at first rather slow-moving, but does a good job of setting up the relationships amongst the major players. Edward Malone is a hapless reporter who has asked Gladys Hungerford for her hand in marriage, only to be turned down because she could only marry a man of adventure, someone who has courageously faced death and accomplished some great feat! Malone promptly goes off and joins the expedition of Professor Challenger to hunt for living dinosaurs, which the Professor swears exists and that he’s encountered. 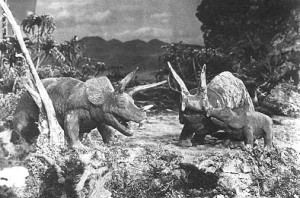 Once the narrative reaches the setting of the Amazon, things get rolling. The film is incredibly dramatic, depicting a flying pteranodon, grazing brontosaurs, and a number of dino battles, as an allosaurus eats everything around it. The centerpiece of the movie is the eruption of a volcano, with its depictions of a fiery jungle and herds of dinosaurs trying to escape death by lava. Allosaurus takes one last opporunity to jump a bronto while both are fleeing, and rides it out of harms way while it takes bites out of it. Visually, the whole sequence is really striking and very convincingly created.

Throughout the film, I was impressed that the stop motion animals behaved in a very realistic way, and the battles seemed believable and quite bloody. When an allosaurus took a bite out of a triceratops, you felt it. Stop motion had been around since 1898, and it was becoming more prevalent and more fluid, but there was one dude: Willis O’Brien. He became one of the leaders in his field. In fact, he made improvements in his craft during the filming of this movie – this was his first attempt at combining live action with stop motion, and at first was able to achieve this only via split screen. As production continued, he developed a ways to combine the two elements in the same part of the shot. Willis would famously go on to do King Kong and Son of Kong (both 1933), and won an Academy Award for best visual effects for Mighty Joe Young (1949). His greatest legacy, though, is in the body of work of his protege, Ray Harryhausen.

When you think the film is winding down, there’s one more big set piece: the expedition brings back a live brontosaurus as proof that dinosaurs do exist, only it gets loose and runs rampant through the streets of London. There are some amazing shots of crowds of Londoners cowering before the towering beast, and one of a guy getting crushed underneath its massive tail. These shots are incredibly well conceived and realized – the scene of the bronto bringing down a brick building is especially impressive – and you see the origins of King Kong quite clearly.

Throughout the expedition, a romance blossoms between Malone and Paula White, whose father was on Challenger’s first expedition, was lost, and they are now attempting to find and rescue him. Paula doesn’t give in to Malone’s advances because “I could never steal my happiness from another woman.” When Malone and Gladys reunite, she says “I hope you can forgive me for not waiting for you – this is my husband.” And he’s just a lowly retail clerk. Malone asks “So what great feats of daring and danger has this guy ever performed?” and she responds “Oh, that was just me being silly.” What a bitch. But at least it means that Malone and Paula are now free to be together! Everyone wins!

The Lost World is a wonderful film and one that changed the shape of SF films to come. Even though I’ve been aware of this film all my life, I’d never seen it. I’m very glad that writing this series of blogs has inspired me to change that.

One thought on “History of Sci-Fi Cinema 2: “The Lost World””