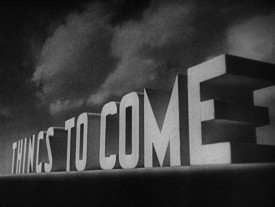 Things to Come is based on H G Wells’ novel The Shape of Things to Come from three years earlier. It is more or less an anti-war parable told in three chapters, depicting different times in the future of the fictional British “Everytown.” It’s always said that “good” science fiction carries a message, reflects on society, extrapolates a perspective to its extreme to illustrate a point. Things to Come certainly does that.

Our first visit to Everytown is in 1940, and war breaks out. John Cabal and his friends have their Christmas interrupted by the sounds of bombing. The scenes of gunfire, explosions, collapsing buildings and tanks is really pretty gritty and realistically portrayed. Wells did a good job of predicting the start of World War II, missing it by only a little over a year. What he gets wrong is how long it would last. In the movie it’s still raging in 1966, when a biological weapon is used and brings about “the wandering sickness” which wipes out most of humanity and brings about a new dark age and the breakdown of societies and government.

In 1970, Everytown is a self-declared sovereign state ruled by the Chief. And they are at war with the Hill People, because apparently humans never learn. But this time the aggression is opposed by an outside force – Wings Over the World, an independent group of “engineers and mechanics” who have banded together for the protection of freedom and stand opposed to self-declared sovereign states everywhere. In The Day the Earth Stood Still style, John Cabal comes flying in, representing Wings, and says that if the aggression doesn’t stop, well, his lot will have to come in and “clean up.” Of course, that’s what it comes to, and the Wings group swarms in on enormous planes and gas the citizens of Everytown (sleeping gas, nothing lethal).

Fast forward to 2036 and another gun is being built, but this one is not for war, it’s for exploring space. Where Wells missed the start of WWII by a year, he missed manned moon landings by about 6 decades. This space gun is the latest version of Jules Verne’s one, which originated in 1865 in Verne’s From the Earth to the Moon, and which was first portrayed on screen in Le Voyage Dans La Lune in 1902. But here, tired of the ills that progress has brought upon Everytown, the citizens revolt against Oswald Cabal and threaten to destroy the space gun. The launch goes ahead, just in time. Cabal, unswayed by the will of the people, says that progress must happen and humans must move forward. “All the universe or nothing, which shall it be?”

The score throughout the movie is nothing short of epic, “specially” composed by Arthur Bliss (as described in the opening titles). But at the finale, with full orchestra and choir singing “which shall it be?”, it goes a little bit over the top.

This is a solid film, though a tad slow-moving (I don’t mind that so much). The depictions of war and pestilence are realistic, and I love that in all three chapters there are references to “the gas of peace.” The time-lapse transition between the second and third chapter is really beautifully produced, and is one of the highlights of the film. Its a lengthy segment but is a visual feast. The design elements in the 2036 chapter are really striking, especially the aircraft. In fact, aircraft in all three chapters are really beautifully designed, and the massive planes that the Wings group fly are pretty amazing and give a great sense of scale on screen.

I’ll admit, though, that I didn’t find this film as engaging as the first four that I’ve reviewed. Even Just Imagine, as silly and wacko as it was, was more entertaining. But this film is invaluable in the development of sci-fi cinema, and I’m very glad to have finally watched it.

One thought on “History of Sci-Fi Cinema 5: “Things to Come””