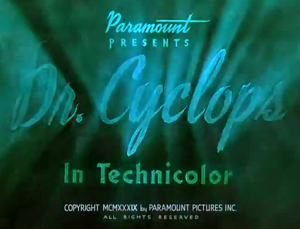 In the heart of the Peruvian jungle, a very polite and mostly civilized mad scientist is conducting experiments using a rich deposit of uranium and radium ore. He has discovered the means of shrinking living matter to the size of a doll. When visiting scientists become rebellious and disobedient, he turns the process onto them. Dr. Cyclops was nominated for an Oscar for Best Visual Effects at the 13th Academy Awards. 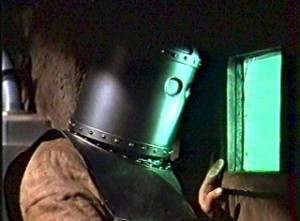 I’ve never seen Dr. Cyclops until last night, but I’ve been familiar with it for many years, as it’s one that always gets mentioned in those “history of science fiction” books which I loved so much as a kid. In fact, I’m reading a very recent one currently and it’s featured in it, too. I always assumed that the film was in black ‘n’ white, as I’ve only ever seen black ‘n’ white stills of it. I was a tad surprised to learn that its rather vividly colorful. The film always gets lots of praise when mentioned, but I have to say that I wasn’t overly impressed with it. It was a fairly run of the mill mad scientist tale that is mainly distinguished by its admittedly impressive special effects. Both the characters and the plot were bog standard, though I suppose in 1940 they seemed far less so.

Since the special effects are the star of the movie, let’s start there. Achieved with a very clever mix of practical effects and trick photography, the end result of miniaturized horses and scientists running around in a normal-sized environment is extremely convincing. Larger-than-life props were built, like chairs, boxes, cacti and scissors, for the shrunken actors to interact with. Sadly, though, the peril that these scientists are in, except when threatened by a crocodile, or when the titular Dr. Cyclops chops a cactus bed (in which the mini-cast is hiding) to shreds with a shovel, isn’t nearly as well conveyed as what will be achieved 17 years later by The Incredible Shrinking Man, so maybe Dr. Cyclops has been done a

disservice by me having seen the later film first and many times. Still, the effects here are very successful, illustrated by one scene in particular in which a live action Charles Halton, as Dr. Bulfinch, is held firmly by a prop hand, interacting with a projection of Dr. Thorkel (Albert Dekker). Viewed with modern eyes and in a remastered format, the mechanisms used to achieve the scene are very obvious, but that doesn’t take away from the ingenuity of the feat or the marvel of the final shot. It’s really beautifully done. The end of that scene, in which Torkel kills Bulfinch without knowing that the others are witnessing it, is quite shocking and one of the highlights of the movie.

What The Incredible Shrinking Man did so brilliantly was to show the dangers and the challenges that the main character faced anew as his reduction in size changed the way he relates to his environment. It’s the same environment he’s lived in for years, but it’s now become alien and life-threatening. The dangers that the miniaturized scientists face in Dr.

Cyclops are mostly ones inflicted upon them by Thorkel – shooting at them, attempting to burn them alive in a patch of brush, etc. (the exception being the aforementioned crocodile) That’s the main difference between the two films: There’s a clear villain in one; in the other, the story is about adaptation to an environment which has stayed exactly the same but the main character must live in in a new and different way. For instance, Pedro’s pooch Tipo is obviously confused and distressed by the change in stature of his beloved owner, whereas in Shrinking Man the docile house cat becomes a potential killer. I can’t wait to get to that one!

Dr. Cyclops was still a thoroughly enjoyable film, even though I think its reputation is a bit exaggerated by what I’ve read about it over the years. There’s some attempts at humor in the dialogue with varying degrees of success, and Thorkel truly is a disturbing and engaging villain. I’m very glad to have finally seen this one.