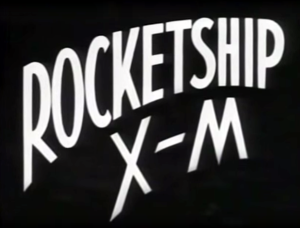 A fanciful film, direct competition to Destination Moon, about a rocket crew who attempt to reach the moon but are thrown off course and instead land on Mars. For the most part it’s similar in structure and tone to DM, but with some significant differences. The most noticeable thing about it is, unfortunately, is that it’s shockingly sexist to modern ears and eyes. It also walks a line between an attempt at hard science and being awkwardly romantic. It gained a dubious honor by being featured in 1990 in the opening episode of Mystery Science Theatre 3000 ‘s second season. 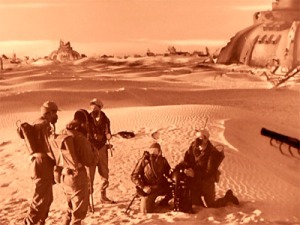 Made on a meager budget of $94,000 and partly filmed on location in a southern California desert to simulate the Mars surface, RXM beat its main competition, Destination Moon, to the box office by 25 days, taking full advantage of all the major press that DM had garnered. It featured very little in the way of visual effects, with the majority of that being optical trickery (the meteoroid shower, the coloration of the Mars scenes, etc). The dialogue is surprisingly flowery much of the time, as when the scientists stand around and reflect on the beauty of the Earth from space, the effect of moonlight on humans (female humans, of course), and landing on “our most congenial planetary neighbor” Mars itself (“It means there are times when a mere scientist has gone as far as he can … when he must pause and observe respectfully while something infinitely greater assumes control. I believe this is one of those times.”). 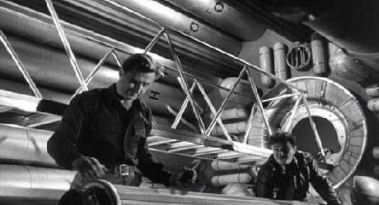 Yes, our intrepid adventurers were headed for the Moon, but an accident caused the crew to be unconscious for days and the ship to careen through space until it came to Mars. Fortunately, at the beginning of the voyage, its stated quite clearly that RXM contains more than double the amount of fuel it would take to reach the Moon and back. Highly unlikely and impractical, but it makes our sci-fi story possible. The crew successfully lands on Mars, and equipped with military pilot oxygen masks, they set out to explore. They come across the remains of a civilization which seems to have destroyed itself in an atomic holocaust. However, they soon find that there are indeed survivors. We never get a very detailed look at the Martians, other than one woman who looks remarkably human but is blind. The Martians attack from a distance, hurling small boulders and primitive stone weapons from atop a ridge. They kill two of the visitors and injure a third. Down to three, the rocket crew lifts off for home.

The thing that I love about this movie is that its not easy — it doesn’t make easy solutions for the crew. Basically (spoilers!), they all die. All of them. Two of them on Mars, and the rest on Earth when they’ve made the return trip home but don’t have any fuel left to make a landing. The rocket crashes, killing everyone on board. That’s pretty brave, and that final scene is genuinely effective and affecting. Plus, its gives the writers the opportunity to make an incredibly important observation about the distinction between success and failure. 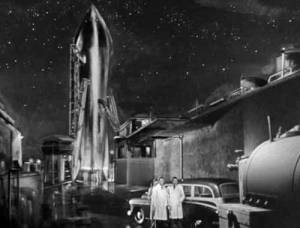 One of the things that I love about these old films is their casual attitude toward spaceflight, like the travelers are getting in a car or boarding a commercial plane. In this one, a press conference is being held with all of the rocket crew present …. while the countdown for launch is going on. After the press conference, they’re basically just milling around in the parking lot and literally say, “Well, I can’t think of anything else, so we may as well go.” The crew boards the rocket literally minutes before take off. I love that.

The most unfortunate thing about RXM is it’s attitude towards women. Now, I fully realize the importance of respecting the time and atmosphere in which a picture is made and respecting its historical context. Even so, I was completely shocked at some of the things that were said. Here are a few examples:

The crew includes one woman, Dr. Lisa Van Horn. At the press conference, one reporter — a woman — asks Van Horn “How does it feel making a trip like this with four men?” Van Horn replies that she never really thought much about that. And why should she? She’s there to do a job, just like the men. The reporter then asks if there’s any reason why any member of the crew should be a woman? It comes across as rather insulting, and one of 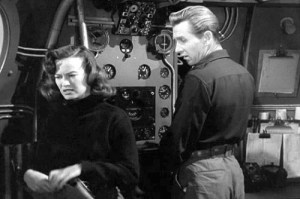 Van Horn’s colleagues, Dr. Eckstrom, the man leading the mission, steps in and basically says “she’s making this trip because she’s fully qualified and it was her computations that made this trip possible.” It really sounds like this is going to be a movie that challenges accepted gender roles of its time!

But oh no … that ain’t going to happen. There are surprisingly sexist comments throughout. The worst offender being in a scene where Eckstrom and Van Horn have to check all the calculations manually to try and figure out a power loss. Van Horn insists that her computation are correct, but Eckstrom says that her results are different from his, therefore hers must be wrong. They will proceed using his results. She argues, saying that he can’t just summarily decide he’s right without checking all the work again! He counters with “Surely you’re not going to let emotion enter into this.” He reasserts his figures as being right (without even looking at hers) and that will continue using his. She has a very mild-mannered flair up at him, but then demures and says “I’m sorry. I apologize.” He sweetly replies “For what? For momentarily being a woman?”

Almost as bad is when Lloyd Bridges’ character asks Van Horn the old “how’d a nice girl like you get mixed up in all this?” question. She says “I suppose you think women should only cook and sew and bear children?” And I swear to goodness, he replies “Isn’t that enough?”

Visually the film is good, but some of the dialogue comes across as pretentious or at best out of character for some of the speakers. A couple of attempts at humour, like referring to Texas viewed from space as “a speck,” fall flat. And of course the portrayal of women is pretty insulting. All that detracts from the enjoyability of the film.