Voyager passes by an anomaly which emits a chronokinetic surge, fracturing the ship into numerous time zones. Chakotay takes a direct hit from the surge which knocks him into a state of temporal flux. Rushed to sick bay, the Doctor injects him with a chronoton-based serum to stabilize him. As a result, he is the only one who can pass through the time barriers, aware of each different time zone. This episode was nominated for an Emmy Award for Outstanding Costume Design, and also has the distinction of being the first Star Trek episode broadcast in a new century (January 17, 2001).

Coming about midway through its final season, “Shattered” is essentially a “Voyager‘s Greatest Hits” episode, treating the viewers to numerous visual and verbal references to many key moments of the show’s run — and even one that we’d not seen yet. Chakotay, able to pass through the barriers and

into all the various time zones, steps into Sick Bay at a time after Voyager‘s entrance in the Delta Quadrant, with a bitchy, indignant Emergency Medical Hologram who has not yet heard of a Mobile Emitter (so sometime in Season 2, a year before “Future’s End”). On the bridge, the ship has not yet entered the Bad Lands, still tracking down Chakotay’s Maquis ship and recognizing him as a criminal when he steps on the bridge (“The Caretaker,” Season 1). B’elanna is still in Maquis gear and still angry at Janeway for leaving the crew stranded in the Delta Quadrant (early Season 1). In Engineering, we find the Kazon along with Seska, having seized control of the ship (“Basics,” Season 3). Chakotay and Janeway are attacked by a macro virus (“Macrocosm,” Season 3). Cargo Bay 2 is all decked out in sheer Borginess 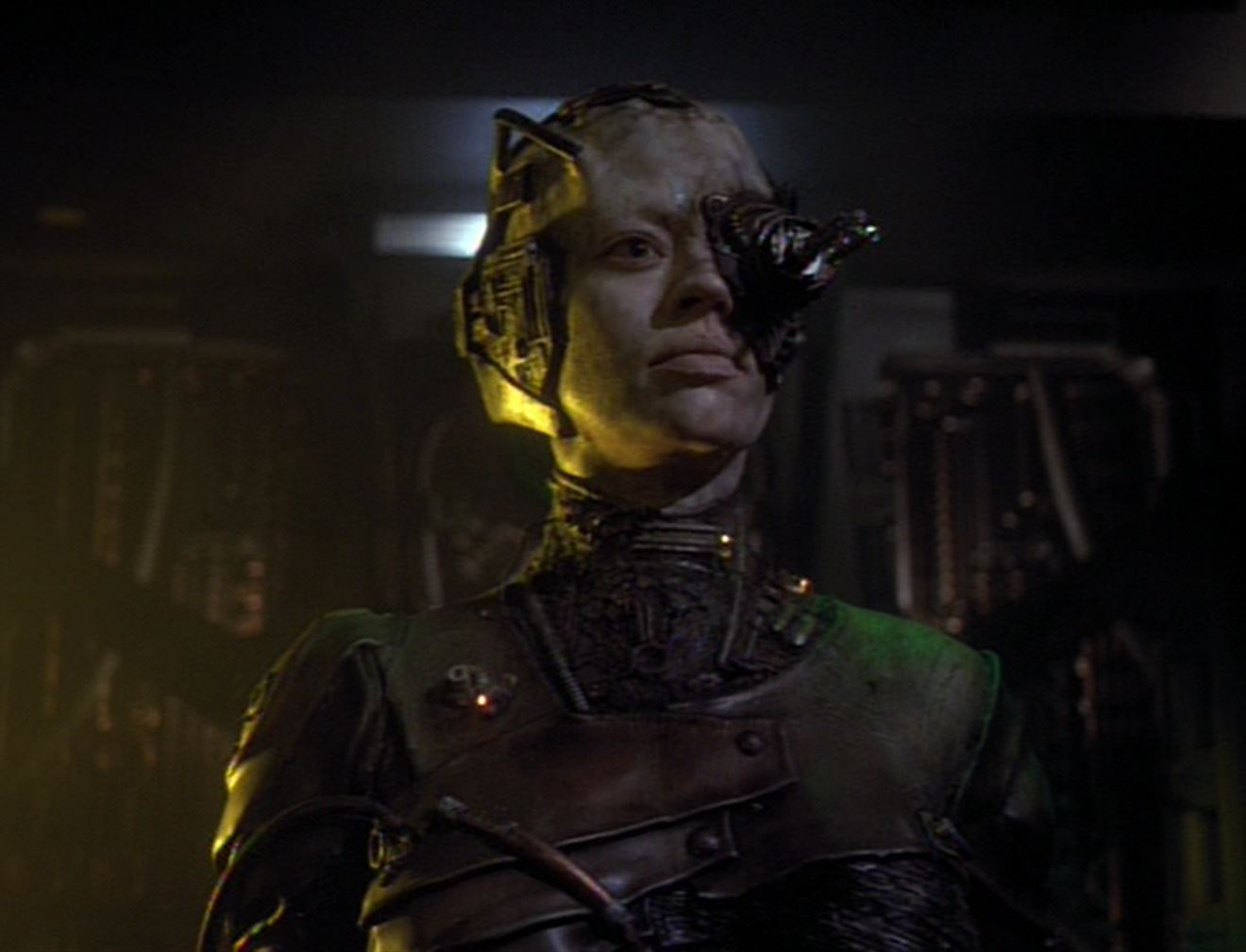 from “Scorpion” (Season 3/4). And in the Astrometrics Lab, it’s 17 years in the future, and Icheb and Naomi are grown up officers. And we even get one final visit with Chaotica along the way.

The original premise of Voyager was that the ship would be stranded on the other side of the universe, completely cut off from the Federation, and stuck with the Maquis criminals that they were originally on the hunt for. These conflicting crews would have to find a way to work together for the survival of them all. It’s a fantastic premise, full of promise. After Deep Space Nine, the producers wanted the next series to be starship-based again, and this premise was developed to differentiate it from Next Generation. Unfortunately, it took about three episodes for the two crews to learn to live and work together, and not much of that potential conflict was ever heard from again, and the show became more or less a clone of TNG in tone if not in setting, complete with characters that were more or less copies of pre-existing ones (B’elanna was a riff on K’Ehleyr, Paris was an exact copy of a one-off character Robbie had played in TNG “The First Duty” just with a different name; later on we get Alexander Enberg playing exactly the same character but not even really renamed — Vorik / Taurik). What’s left of the basic premise, though — the impossible journey home — was still quite powerful and did much to drive the storytelling. One of the nice things about this episode is that it reminds us where Voyager came from, how it started: with a group of outlaws having to be integrated into the ship’s crew structure. It may only be a fleeting moment, but its nice to get that right before the show ends.

Since in my first Trek review — ENT “First Flight” — I mentioned the weird direction Enterprise went with its theme song, I will say here that my vote for best Trek theme and best Trek title sequence goes to Voyager. An amazing theme and gorgeously designed titles. I’m extremely partial to all things DS9, including the theme, so for me to be this wowed by the Voyager theme and titles when the show first started really said something.

For the most part, this is a lightweight episode, a fun walk down memory lane before bidding goodbye forever. Its extremely enjoyable and wonderful way to relive all that was good about Voyager.