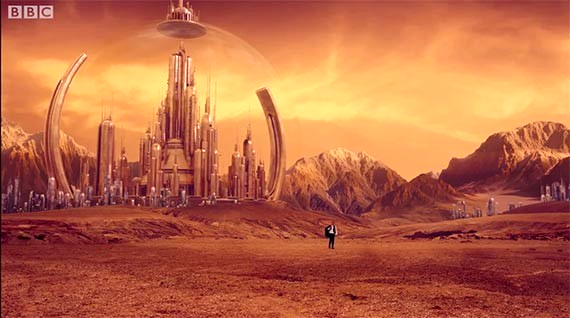 Doctor Who has always been about rebellion. It has been about the Doctor rebelling against the society in which he was born. It was always said that the Doctor stole a TARDIS and left Gallifrey because he was bored, because he staunchly disagreed with his people, the Time Lords, who held immense powers but refused to use those powers to aid others. He has repeatedly come into conflict with the Time Lords because of his chosen lifestyle; at times they’ve opposed him and actively sought to end his adventuring, and at other times they’ve taken advantage of it and used him to accomplish something that they couldn’t be seen to be involved in. In “Hell Bent”, the Doctor, after billions of years, steps out onto the surface of Gallifrey to commit his boldest act of rebellion yet. Because, you see, while this episode looks like it’s about Time Lords, and about Gallifrey coming back into the universe, and about the political fallout of the Time War, and about the fulfillment of the prophecy of the Hybrid, it really isn’t. It’s really only about one thing: a man who is losing his best friend and will take any action necessary to rescue her and keep her safe. Even if that means defying his own people. Even if that means threatening all of time and space.

In last week’s episode, “Heaven Sent”, we learned that what we’ve always been told about the Doctor’s reasons for leaving Gallifrey was lie, and that he actually left Gallifrey because of something he feared. But we weren’t told what it was. Well, now we know: when he was young, he stole his way into the Matrix and learned about the Hybrid. This Hybrid that we’ve been hearing about all season long. At the end of “Heaven Sent,” the Doctor says “The Hybrid is me,” which of course can be taken at least two ways: that it’s actually him, or that it’s Ashildr (who had adopted the name Me). We are presented with both of those possibilities in this week’s episode — as well as a third: that the Hybrid isn’t one person, it’s a combination of two people, two people who push each other too far, to dangerous extremes. Throughout this season we’ve seen the Doctor taking actions too far and being willing to defy the “rules” of time and the universe, using excuses like “after all I’ve done the universe owes me this one.” He even realizes and admits that he may have made a big mistake and overstepped the line when he revived Ashildr from death and in the process made her immortal. But why did he do it at all? Because he’d become sick of losing people. He became angry that rules held him back from saving someone he cared for, someone who deserved to be saved. “I’m the Doctor, and I save people! And if anyone happens to be listening, if anyone has any kind of a problem with that — to HELL with you!” He gives Ashildr a second dose of the tech that’s made her immortal, because 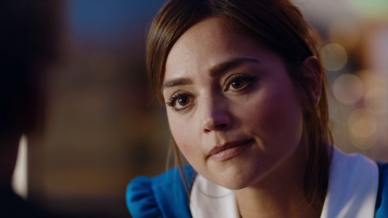 immortality isn’t just living forever, its watching everyone else die. In a sweet, very sad, quiet moment he tells Clara, “She might meet someone she can’t bear to lose. That happens . . . I believe.”

And therein lies the seeds of the finale. Clara is that person to the Doctor. He can’t bear to see her perish, and he fights against the rules, against the Time Lords, to save her from a death that he witnessed. The episode is a beautiful story about a relationship, a friendship that changes the two people involved in both good and bad ways. It’s horrifying that in order to keep Clara alive, the Doctor is willing to repeat the actions he took with Donna Noble, erasing Clara’s mind of all knowledge of her time with him, because that knowledge is dangerous to her well-being. Way back in “The 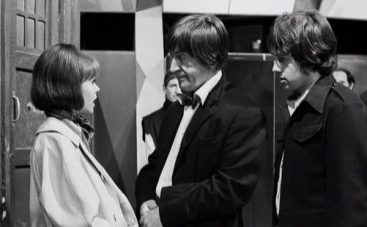 War Games” (1969, Second Doctor), the Time Lords forcibly erased Jamie‘s and Zoe‘s memories of their time with the Doctor as part of a sentence carried out against him in his trial. Seeing his two best friends resuming their lives as if none of their time with him ever happened hurt and saddened him. We now have a Doctor who is willing to take the same action of his own accord against his companions because the thought of them living with no memory of him is less hurtful than of them dying. Only this time its backfired, and it’s the Doctor who has lost all memory of Clara. It’s a rather cruel turnabout, and one fears that with no memory of her, he also has no memories of his defiant actions, having overstepped the rules of the universe, and he may be doomed to repeat them.

So basically, “Hell Bent” is the Doctor (and the series) saying goodbye to Clara Oswald. Only it’s the third in a trilogy of stories that say goodbye to Clara. She met her death in “Face the Raven” ; the Doctor mourned her in “Heaven Sent”; and now he takes action to rescue her no matter what the cost. Its a beautiful arc of loss, grief, and anger. Here’s my concern with this: Since the series was revived in 2005, goodbyes of both Doctors and companions have gotten bigger, more emotionally wrought, more tragic and traumatic. Where does that end? This time it took three full episodes to tell the story of Clara dying and how the Doctor deals with it. On the one hand, it is nice to see that these things have consequences, but at the same time, the escalating nature of the narrative is getting so that next time it might take a whole season to deal with a companion leaving. Is it even possible to have a companion who simply decides to leave and says “Thanks for the adventures, Doctor, I had a great time! See ya ’round!” Would the audience feel cheated if that were to happen?

“Hell Bent” actually did do more than just say goodbye to Clara; it was still an episode about Gallifrey and the Time Lords, even if indirectly and not in 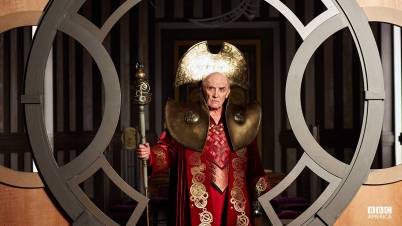 the way some of the audience would have wanted or had expected. The Doctor basically stages a one-man coup, claims Gallifrey to be “his” planet, exiles Lord President Rassilon, and informs the High Council that they’re next on the list. But wait, how did Gallifrey find its way back into the universe? Well, the episode doesn’t bother to tell us. In fact, it actually sidesteps the whole issue by Clara wanting to know how it had come back, and the Doctor replying “I didn’t ask.” It seems to me that after 10 years of the New Series telling us that Gallifrey was gone by the Doctor’s actions, after the Doctor reversing history and saving Gallifrey in “Day of the Doctor” (2013, the 50th Anniversary episode), being given an off-screen reemergence is extremely underwhelming and a bit disappointing. I don’t think that weakens this story at all, when taken on its own terms, though; I just kind of wish that we’d been given the return of Gallifrey in its own right before we’d been given this story.

This season, as I’ve said before, has been extraordinary, the best of the new series so far. It wrapped up in a stately, emotional, beautiful way bringing not only Clara’s storyline to a close but also that of the Doctor 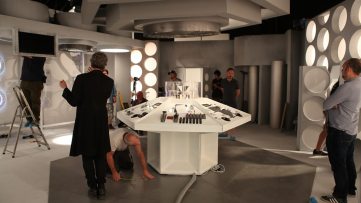 coming to terms with the consequences of his actions. Off we set on new adventures. At Christmas we have the return of River Song, and next season we will have the introduction of a new companion that Steven Moffat says will change the whole chemistry of the show. Sounds interesting. For now, we bid adieu to the Doctor, to let him hopefully find some peace.

One thought on “Doctor Who: Reflections on Season 9: “Hell Bent””