“Captain, he is too alien! He makes me taste yellow root munched between flat teeth!”

Spock, Uhura and Sulu are traveling by shuttlecraft to deliver an ancient artifact, a Slaver stasis box, to Starbase 25. Along the way, they discover a second box (an incredibly rare find) in the Beta Lyrae system and set down on an ice planet to investigate. They are captured by the Kzinti, who hold the other stasis box and used it as a lure. Confiscating the Federation crew’s box, they open it to discover what appears to be a Slaver weapon. The crew must escape their captivity and prevent the Kzinti from retaining the potentially devastating weapon. In the end, it is the weapon itself which deals with the Kzinti, eliminating them. 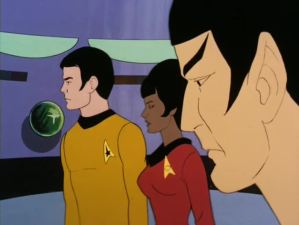 “The Slaver Weapon” has a pretty interesting history. Script editor DC Fontana approached Larry Niven about writing for the series. Niven was becoming a force in the SF world since his published debut in 1964, and in the late 60s and early 70s had won numerous Nebula, Hugo and Locus awards. He’d become pretty well known for his 1970 novel Ringworld, set in his Known Space universe, also the setting of his Man-Kzin Wars works. Niven agreed, and set about writing a story that would cross his Known Space into the Star Trek universe. His first attempt was rejected by Fontana, and his second attempt was deemed “too bloody.” According to Niven, it was Gene Roddenberry who suggested that

he adapt his 1967 short story “The Soft Weapon” for his episode.

In “The Soft Weapon,” Nessus, a member of an alien species known to humans as Puppeteers, is traveling aboard a passenger ship with a stasis box when a second box is detected in Beta Lyrae. Very little from the original story is altered for the episode, with Nessus and his two shipmates Jason and Anne Marie Papandreou becoming Spock, Sulu and Uhura respectively. The Slavers, a race that existed a billion years earlier, had constructed stasis boxes that perfectly preserved artifacts without being affected by time. These boxes, then, are a link to a long-dead race from the distant past, an opportunity to learn more about an era that Starfleet knows little about, and of great archaeological value. Spock’s log entry in the episode attributes a number of Starfleet technological advances to information gained from studying the Slavers.

The Kzinti are interesting adversaries; it would have been great to see how they could have been developed if they’d continued to be used. TAS had already introduced its own feline species, of course — the Caitians,

represented on the Enterprise by M’ress. Comparing and contrasting the two races could have provided some intriguing storylines. The Kzinti are agressive warriors; being carnivores, they have a strong aversion to planet eaters. One of the Kzinti is a telepath, and Spock instructs Sulu, if he feels the Kzinti probing his mind, to think only of chewing vegetables to repel the invader. The Kzinti females are described by Spock as being “dumb animals”; only the males have intelligence, and they therefore are not used to dealing intelligently with females of other species. The Kzinti that we meet here are posing as scavengers but are secretly working for the Kzin government or military. It would have been interesting to see how this race would have been developed in the Star Trek universe.

One of the things that I love about TAS is that the secondary main cast gets so much more to do, not only in terms of their own characters, but with no guest voice actors, they portray all of the guest characters as well (with a few notable exceptions, like Mark Lenard, Stanley Adams and Roger Carmel reprising their roles as Sarek, Cyrano Jones and Harry Mudd). This is especially true for Nichelle Nichols, who not only gets significantly more dialogue here than she did in the live series, she gets better roles too. And while “The Slaver Weapon” may not be the best Uhura episode of

TAS (I recommend you check out “The Lorelei Signal” from earlier in the season, in which Uhura takes command of the Enterprise when all the men are incapacitated) it’s certainly a good one for Sulu. Both Uhura and Spock are treated as second-class citizens by the Kzinti and therefore beneath contempt (one for being a woman and the other for being a pacifistic vegetarian). Sulu takes the lead in negotiations with the leonine aggressors as the other two characters are forced into the background. Sulu is also said to be Spock’s superior in weaponry, and Spock defers to his expertise in determining the nature of the Slaver artifact. This almost certainly would not have happened had Kirk, McCoy and Scotty been in the episode, and certainly not something that would have happened in The Original Series.

What is most interesting, though, about the episode featuring only these three characters is that originally, Filmation (the series’ production company) wasn’t going to hire the whole cast, and were planning to have James Doohan and Majel Barrett provide the voices of Sulu and Uhura in addition to their regular roles and all the guest characters. Leonard Nimoy was incensed and refused to voice the role of Spock until the full cast was hired. Maybe this episode is an apology to Nichelle and George and a thank you to Leonard.

“The Slaver Weapon” is a highly enjoyable episode with a solid storyline and an emphasis on two crewmembers who most of the time didn’t get significant screentime in The Original Series, introducing a fascinating new enemy to the Star Trek universe. It’s too bad we didn’t see more of the Kzinti (though there are a couple of mentions here and there in later series.