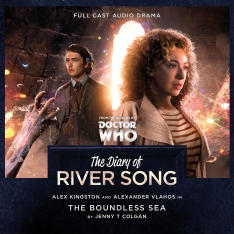 “I had a chance encounter today with an interesting woman. A rather remarkable woman. An archaeology professor (part time!) called River Song. Initially she came across as aloof, distant, with an air of superiority. It was obvious that she possessed a great intellect, as wide and deep as The Boundless Sea; it seemed that she had traveled much farther than any of us could have dreamed. But she also had a bit of a naughty side to her, something I can only describe as a mischievous nature. And she had the most bizarre implement. She called it a . . . sonic trowel. I’ve no idea what she meant by that. How can a trowel be sonic?

“Anyway, we found ourselves drawn into a journey to the Mesopotamian region to investigate some strange goings on — a young woman who’d gone missing during a dig in a newly discovered ancient tomb after reporting seeing strange lights coming toward her.  After much traveling we finally arrived at the dig site and found that the majority of the excavation team had been scared away and the missing girl had actually been trapped within the tomb for weeks. We dug our way in, in hopes of reaching the poor girl before it was too late, but instead we discovered the most bizarre and unexpected things. Something from another world. Something alien. These things brought back to life a long dead queen, who had been buried alive with her husband’s body. I will admit that I didn’t quite know how to react to the whole thing . . . but Professor Song did. I must say I was quite impressed with her skill, her resourcefulness, her sheer intelligence. I wondered if this is what all of Prof. Song’s adventures were like, and I found myself not wanting this one to be over! It was almost an answer to a wish when our other traveling companion revealed himself to be something quite out of the ordinary himself. He seemed to know things about her that he shouldn’t have been able to know, and he said he was working on behalf of someone else. He had a letter for Prof. Song, and to my joy, the letter lead us to yet another adventure! Because, you see, it was an invitation . . .” 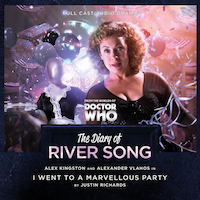 “The adventure that I found myself a part of in Mesopotamia was something unlike anything I could ever have imagined! I was terrified . . . but elated at the same time. I felt alive with adrenaline. But what I could never have expected in a million years is where that invitation would lead us next. Because from Mesopotamia, we Went to a Marvelous Party, only . . . the party was aboard a space ship! We were in space! I’d never imagined such a thing was possible, but River seemed to take it quite in stride, talking about the thrusters and such. I can’t quite get my head around the life this woman leads. The most shocking part of it was that upon arriving at the party, we met two of the people from the Mesopotamia dig — one of whom we had thought was dead! They said they were part of an organization (not called the Rulers of the Universe, apparently, because that would be tacky) and it became obvious that there was a much larger game being played. Soon, a very strange woman made contact with Prof. Song and took her to where a rather important man had been murdered. And, to quote another famous detective, the game was afoot. One of the two men from Mesopotamia suggested that River take the lead in investigating the murder, as she was an outsider and therefore impartial, but I overheard the two of them talking in secret and they said something like “this will put River’s skills to the test.” I didn’t like the sound of that. One of the Rulers told River that she’d seen River’s husband earlier. She’s married?? But that didn’t seem to surprise River at all. “Now that we have a crime scene he’ll turn up soon enough!” I lost track of Prof. Song soon after that, as she got busy investigating, but I learned later that an attempt was made on her life too. She did solve the mystery, of course, and also took care of a much larger problem, though she never told me what that was. Had something to do with one of the planets that this spaceship traveled near. As we were about to leave, River’s husband finally caught up with us! But it was the oddest thing — River didn’t recognize him, said she’d never seen the man before in her life! This situation has become even more curious!” 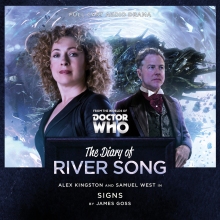 “At that point, Prof. Song left the party with her husband and I didn’t see her for a while. I’m not sure exactly what happened next; we didn’t see her nor her husband again for quite some time, there were no Signs of them anywhere. Fortunately, she did much later recount to me a little of what happened while she was gone. She and her husband were searching for something called Sporeships. She tried to describe them to me, said something about them wiping out whole civilizations and needing to be stopped, but I didn’t quite understand it all, and didn’t understand how these things could be stopped by just the two of them. They must be pretty extraordinary people to even try! My impression of what happened to her while she was gone is rather fuzzy. Maybe one day she’ll let me read that diary of hers and I’ll get the full picture — assuming she’s written down this bit. She comes across as so confident, so brassy, but when she has a secret — and she has many secrets — she holds them close to her chest, almost like they’re mementos. When we finally saw Prof. Song again, her husband was not with her, which I thought was peculiar. I asked about him, but she avoided the question. She had a new determination, a mission. She seemed driven . . .” 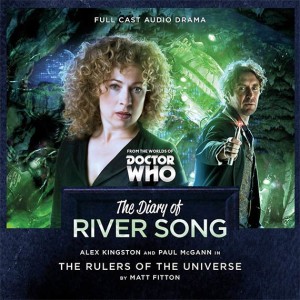 “I’ve been trying to think of how to tell you about this last chapter in my adventure with Prof. Song, but it all happened so fast, was such a whirlwind — I’m having a difficult time getting my head ’round it. Another man arrived aboard the party ship, and this man seemed to be known to River — in fact she seemed quite intimately familiar with him, this man that she called Doctor. But she kept avoiding him, saying that she couldn’t interfere with him, that he was too young, that it wasn’t time yet. He was trapped aboard one of these Sporeships, and she went to great lengths to protect him, to help him from our distant vantage point aboard a jettisoned section of the party ship with one of The Rulers of the Universe, but she kept her distance. I don’t know who this Doctor was, but he was amazing. Vastly intelligent, possessing infinite knowledge and experience; he claimed to be part of something called a Time War. He said he wasn’t of the War, but that he only helped people in need whenever and wherever he could. He struck me as infinitely compassionate. Together they diffused the threat that the Sporeship posed. But when he said he would fly his ship to come rescue us, she cut off communication to him. It seemed to hurt her to do so, but she said it was necessary. I still don’t really understand why.”

“I’ve now been returned home. The adventure is now behind me. I’m still trying to make sense of much of it; a lot of what happened is beyond my experience. I mean, c’mon, party ships in outer space! But one thing I know for certain: if I ever happen to have a chance encounter with Professor River Song again . . . I will drop everything and run right along with her, no matter how far or how fast she runs! Her life is amazing — thrilling, dangerous, exciting all at the same time. I won’t miss it for anything!”

If you enjoyed this review, please purchase a copy of my book Doctor Who’s Greatest Hits: An Unauthorized Guide to the Best Stories From Time and Space!