“Live long and prosper. I shall do neither. I have killed my captain . . . and my friend.”

Spock has been acting irrationally. Erratic behavior, emotional outbursts, the works. He requests a leave of absence on Vulcan; Kirk wants to comply but pushes Spock for his reasons. What Kirk learns is that there’s a whole lot more going on under the seemingly impenetrable veneer of Vulcan logic and stoicism — there’s a volcanic (pun intended) rage that threatens to erupt every seven years at the time of Pon farr. Kirk offers to help Spock during the associated ritual, only to learn that he’ll have to fight his friend and first officer to the death.

Spock had been, unequivocally, the runaway character in the show’s first season, and NBC was keen to capitalize on that. They wanted an episode that featured not only Spock, but his home planet and his people. The episode was intended for Season One, but was given to well-known science fiction author Theodore Sturgeon, who was known to be a bit of slow hand at the typewriter. Delaying the episode until Season Two may have delayed the network’s plans to hype its mysterious alien character, but it also gave the opportunity to start Season Two with a bang.

However, the episode goes far beyond its original design. “Amok Time” is the moment when nearly all the well-known tropes about Vulcans that we take for granted got their start. We get a sense of the ritualistic nature of Vulcan society and history here. We learn that Vulcan has a violent past and that the Pon farr ritual is something ingrained in its people. We meet other Vulcan characters for the first time. We see the Vulcan salute for the first time. We hear the words “Live Long and Prosper” for the first time. We learn that Vulcan women’s names begin with “T'”. Even though we’d already been introduced to the nerve pinch and the mind meld in the first season, “Amok Time” more than any other episode is the template for all subsequent Vulcan stories.

The story that this episode tells, though, isn’t simply one of Vulcan history. It’s also about friendship, particularly that between Kirk and Spock. Kirk wants to help his friend, but his 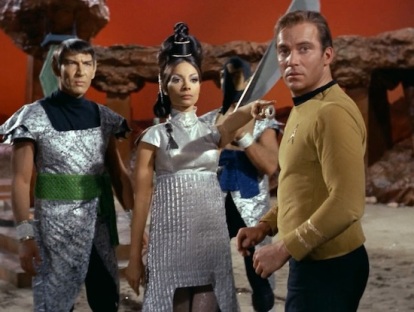 friend isn’t forthcoming with the information that Kirk needs to request a change in their orders from Starfleet. Kirk agrees to a ritualistic dual with Spock in order to help his friend, but then is horrified to learn that the dual is one fought to the death. Upon Spock’s victory, he grieves over his actions and the death of his captain; and when he returns to the ship, he giddily and impetuously displays his happiness at finding his friend alive. The latter is one of the most joyous moments in all of the original series, that unguarded glee that Spock expresses. Leonard Nimoy takes this taciturn character through an emotional journey that is a reward not only for the actor but also for the audience who has watched this character grow and change over the course of the previous season. Spock is a complex and layered character and Nimoy expresses all of that beautifully, even in scenes in which he’s outwardly required to express nothing.

The guest cast, too, is given a weighty task: bringing to life the Vulcan culture for the first time. Celia Lovsky strikes an imposing and statuesque figure as T’Pau. She may be an older woman, but there is nothing frail about her. She unquestioningly rules these parts, and it’s clear that our heroes are on her turf. Similarly, television veteran Arlene Martel takes what could have been a stuffy role and makes it one that sings with strength and dignity. Martel worked heavily in television in the 60s and 70s, and stayed active in the profession and on the convention scene right up until her death on August 12, 2014, only four months after her April appearance at TrekTrax Atlanta. 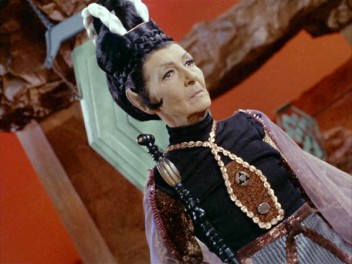 Special mention should also go to director Joseph Pevney, who does a tremendous job of portraying Spock’s descent into his blood fever with some rapid editing and clever camera angles in the scenes going into the dual; and composer Gerald Fried, who created one of the show’s most iconic scores. The music that accompanies the fight scene is dramatic and frenetic, and became one of the go-to compositions for action scenes in Season Two, and one of the most recognizable music cues in television. It reappeared in numerous places over the years, including The Cable Guy, The Simpsons, Futurama, Warehouse 13, etc.

My one complaint about this episode is that as Kirk apparently dies — after having been publicly given an injection by Dr. McCoy — the pronouncement of death is made by McCoy himself and not checked by anyone else. With T’Pau having declared that offworlders are not permitted to take part in the ritual, surely a Vulcan medic would have been on hand to make an official ruling on the outcome of the dual. It seems highly unrealistic — and indeed, illogical — for the Vulcans to take the word of a guy who is best 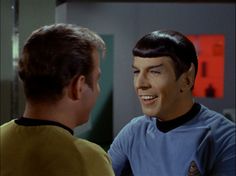 friends not only with the victim but also the killer and has clearly displayed his desire to protect them both, rather than checking for themselves.

The audience — and NBC — would get even more emphasis on Spock a few weeks later in “Journey to Babel”, which, while “Amok Time” is more an exploration of Vulcan culture and history, delves into Spock’s personal history and immediate family. But we’ll get to that one all in good time. “Amok Time” served at the time to capitalize upon the popularity of Spock, but it became one of the most important and influential episodes in Trek history.