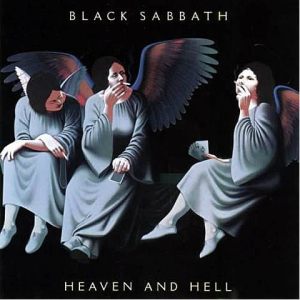 I had a best friend from the middle of 1st grade all to way to the end of 12th grade. His name was David. We hung out pretty much all the time, and spent the night at each other’s house a lot when we were younger. He’s one of those people who will always be a part of me.

I remember staying over at his place one time, and his older brother had a bedroom in the basement. That in itself fascinated me, as my house did not have a basement (its a pretty rare thing for homes in Central FL to have basements). I was always intrigued by the music the brother listened to, and there were things that David liked that he picked up from his brother that I would never have been exposed to otherwise, like Jean-Luc Ponty.

I remember being down in the basement with David this one time, and I was browsing through his brother’s LPs. I came across Heaven and Hell and was pretty transfixed by it. The front cover was interesting, but far more it was the back cover – which featured a pencil sketch of the band members – that really grabbed my attention. I’m not even sure why. But something about it just seemed … important. Now, I knew who Black Sabbath was but I didn’t know much about them. I just knew that this image wasn’t what I expected from them.

That feeling only increased when I heard the album. I immediately loved it, but it wasn’t what I expected from Black Sabbath. I’d heard “Paranoid” before, and one or two other songs, but I was not prepared for this. This was so different from what I thought a BS album would be like (in fact, I remember wondering at the time what other “real” Sabbath fans thought of it). The only name I knew from Sabbath was Ozzy Osbourne, but that guy was nowhere to be found. Instead, there was this new guy with the incredible voice.

Actually, my introduction to Ronnie James Dio came from that same year, from two songs he recorded on Kerry Livgren‘s first solo album, Seeds of Change – “To Live for the King” and the powerhouse “Mask of the Great Deceiver”. I was a huge Kansas fan at the time and so was really excited about Kerry’s first solo record. Ronnie’s vocals on these songs blew me away, and I wanted to know more about him. I found Heaven and Hell soon after that and my journey down the long dark road of Sabbath began. But I also delved into the history of Ronnie’s previous band, Rainbow, which I also fell in love with.

Soon after  Heaven and Hell, I bought the “best of” package We Sold Our Soul For Rock ‘n’ Roll. My growing love for Black Sabbath led to my love of proper heavy metal and hard rock, and through them I quickly found my way to great bands like Judas Priest, Iron Maiden, Metallica, Megadeth, Ozzy‘s solo stuff, plus all the “hair” metal bands of the later 80s.

I stayed a Dio fan all the way up to his death, and he’ll make another appearance in a future blog. Heaven and Hell remains one of my favorite hard rock albums ever. It’s an amazing work that is solid from start to finish. Great production, great performances, great songs and amazing vocals and lyrics.