Waking up on January 11th to the unexpected loss of David Bowie was the saddest thing I’ve experienced in a while. The impact that he and his music had on my life is something that’s very hard to express. The night he passed away, before the news broke, I was reading a Billboard article ranking all of Bowie’s albums, and I thought I’d make my own list. I had no idea at all that my hero was most likely already dead at that point. I went to bed with Mr. Bowie fully on my mind, his complete catalog buzzing around my brain, and woke up the next morning to discover that he was gone. It was staggering.

Here’s the list that I put together along with some thoughts on each album. Keep in mind that there are NO bad Bowie albums! Just because I rank something low on the list doesn’t mean I don’t love the album, it just means that I think there are others better than it.

I’d love to hear your feedback and what you think the greatest Bowie albums are! And even which of my rankings you think are completely wrong! Leave a comment!

END_OF_DOCUMENT_TOKEN_TO_BE_REPLACED 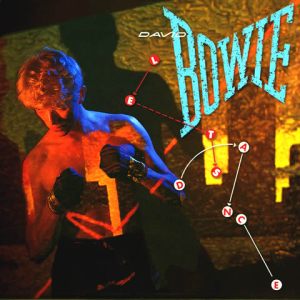 By the time Let’s Dance came out, I was more than ready to surrender to the Thin White Duke. I had a friend who was a big Bowie nut who played “Heroes” a lot, as well as BOWIECHANGESONE. Plus, there were the songs that were perennially on the radio. I was starting to become familiar with, and even fascinated by, some of Bowie’s weirder songs, like “Beauty and the Beast”. I think I was really starting to be a Bowie fan around ’82, so Let’s Dance was kind of like someone struggling to open a ketchup bottle and then handing it to someone else, who pops it off easily, saying, “oh, you loosened it up for me.” Same here. After coming to terms with some of Bowie’s more challenging catalog, there was no way that the breezy, accessible pop of Let’s Dance could fail to seal the deal.

Actually, it wasn’t necessarily the album that sucked me in for good – it was the concert video of the Seriously Moonlight Tour which did it. Shown on HBO, I watched it over and over and over, memorizing every song, getting introduced to a lot more of his back catalog, hearing songs like “Breaking Glass”, “Sorrow” and “Cracked Actor” for the first time, and recognizing songs like “Golden Years”  and remembering hearing it on the radio back in ’75/’76. This concert was for the most part a career-spanning introduction to the magic of Bowie, and I ate it up.

Once I had consumed that concert video, I began a rampage of Bowie purchases, snapping up all the old albums I could. I will admit that some of them were hard to swallow, as the production is kind of iffy, especially things like Scary Monsters. There were many instances where I would take to only a couple of tracks per album and not connect at all with the rest of it. For the most part I eventually grew to love every album. There’s still one, though, that I only like two songs on and don’t ever listen to the rest of it.

I just re-watched this concert last week with my buddy Josh, and found that I still love it, and that there are some songs that I like this version of more than any other, like “Young Americans”, “Scary Monsters”, “Cat People”, “Fashion” and the opening song, “Look Back in Anger”. I remember about five years ago going to a Bowie tribute night at a local bar, where a bunch of local bands (and a couple not-local) each played two or three songs. Most of them played hits, but a few strayed into some lesser-known material. The first band that played kicked off the show with “Look Back in Anger”, which thrilled me to no end, and I sang and danced along. Afterward, the singer came up to me and thanked me, saying that he was the only one in the band that wanted to do that song, the other guys thought no one would know it and their opening song would tank.

My love of Bowie led me to discover a lot of other great artists, most notably Kate Bush, who will get her own mention a couple of entries from now. I’ve stayed a loyal Bowie fan over the decades, loving his 80s, 90s and 00s work just as much as his earlier stuff. Reality was a superb album, and I thought that was the last we’d ever hear from him until 10 years later, he dropped a whole new album, The Next Day, out of the blue, and it has some stellar material on it, like the title track, “Dirty Boys”, “Love is Lost”, “Valentine’s Day”, “I’d Rather Be High” and “Set the World on Fire”. I look forward to hearing and seeing whatever else Bowie has in store for his fans.