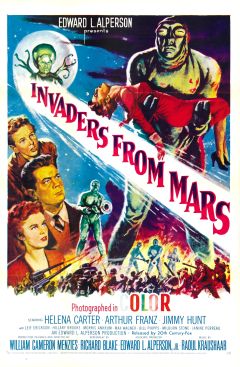 Wikipedia describes the Second Red Scare as having inspired movies and literature to produce “stories and themes of the infiltration, subversion, invasion, and destruction of American society by un–American thought and inhuman beings.” There is perhaps no clearer or less subtle example of that than Invaders From Mars, with body snatches, mind control, personality change, threat of invasion, etc. Not that these themes are rare in science fiction of this period, but here they are so “on the nose.” The performances are far from nuanced, the Americanism proudly flag-waving, and the music dramatic and obvious. And yet … it turned out to be a highly enjoyable viewing.