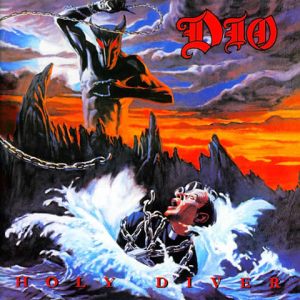 I remember buying this album very well. I was browsing in my favorite record store in FL, Spec’s Music, and just happened upon it. I didn’t know that Ronnie James Dio had released a post-Black Sabbath album, so this was quite a surprise. By this point I had followed his years in Black Sabbath but had also fully explored his other band, Rainbow. I was very curious to see what Ronnie would do outside of these two powerhouse bands.

I loved this album immediately. Well, most of it, anyway. I’ll be honest, the one song that I didn’t like at all was “Rainbow in the Dark”. It just seemed too poppy, too keyboard-driven, to fit with either the rest of the album or with what I was expecting from Ronnie. Its still my least favorite song on this album, so it surprises me sometimes that people who like even heavier music than I do love it so much.

Aside from that, though, there are some killer tracks here. I remember being particularly blown away by “Stand Up and Shout”. In fact, I later picked up an import 12″ single of “Rainbow” and it had a live version of “Stand Up” on the flip side, recorded at Castle Donnington. Wow, what a powerful performance it was! Much better than the superb studio version. I’d seen Black Sabbath on the Mob Rules tour, so I knew that Ronnie was a great performer (sadly that was the only time I saw Ronnie live, but its a show that I remember extremely well).

I was very excited about Dio, partly because Ozzy Osbourne‘s post-Sabbath career had been so successful, and I was hoping the same would happen for Ronnie. And for a while, it did. The first four Dio albums all performed pretty well and had good MTV and radio coverage. It was fun to watch the more or less parallel path that the two singers’ solo careers took. There was a bit of a rivalry between them, which is a shame, because a co-headlining Ozzy/Dio tour would have been amazing. It could never happen, though, as was proved when Sammy Hagar and David Lee Roth attempting such a tour in 2002. It was a big success, but read Sammy’s bio to see some of the drama that went on backstage.

Even though overall not as successful as Ozzy, Ronnie’s solo career was a metal feast, turning out amazing albums like The Last in Line, Sacred Heart, Strange Highways and Killing the Dragon which are among the best works of his entire career, solo or otherwise. He rejoined Sabbath in 1992 for one great album, Dehumanizer, and then rejoined them under the name Heaven and Hell in 2007 for a tour followed by a new album.

Ronnie’s death in 2010 was devastating to me personally as it was for everyone in the metal community. Luckily, his wife and manager Wendy has kept his music alive with some really terrific releases, like a two-CD release of his two Castle Donnington performances.