A few posts ago I wrote a lot about Fly By Night, the album that introduced me to Rush. In that post, I mentioned that Permanent Waves had a profound effect on me when it was released a couple of years later. The more I’ve thought about it, the more I realized that it needed its own blog post. Because this album is one that shaped me tremendously.

I remember quite distinctly when I first heard it. Our local album rock station, Zeta 7, (god rest its soul) used to play complete albums at midnight, and they’d frequently use this time slot to debut new releases. I recall staying up that night to record the broadcast onto cassette (as I did with many other similar broadcasts). The album was so different to anything Rush had done in the past, just as Farewell to Kings had been a drastic departure back in 1977. This was still progressive rock Rush, but they’d found a way to make their brand of progressive rock commercial, radio friendly, accessible. The songs were shorter; the songs were catchy. They had choruses with great hooks. But they still retained prog elements.

Also, the production was perfect. The songs sounded big and full, but every instrument could be heard individually. There was a clarity of sound that some later Rush albums were lacking.

After recording the album that night, I listened to it over and over, playing it, rewinding the tape, playing it again, and repeat. I studied that album. I was fascinated that the styles ranged from the commercial pop of “The Spirit of Radio” to the ethereal, mostly tone poem “Jacob’s Ladder” to the lengthy meandering sonic journey of “Natural Science”, to an actual, genuine, playful love song in “Entre Nous”, and yet it all sounded like one complete statement. No song sounded out of place.

It was Permanent Waves that made me a deep Rush fan. I studied Neil Peart‘s drumming and tried to incorporate some of his licks into my playing. I also studied his way of playing “non-traditional” parts to songs, doing more than just keeping time but accentuating the music, interpreting it, adding to it. From him I learned that the drums can be an integral voice in the structure of pop songs. Drums can actually be musical! I also learned that he was a very busy player, filling in spaces with clever tricks, intricate figures and ornate fills. However, he also knew when *not* to play, and that was a big lesson to me. All this was incorporated into my meager, limited playing, and how I thought about approaching drums.

My study of the material presented on Permanent Waves as well as A Farewell to Kings and Hemispheres led me to a greater understanding and appreciation of complex time signatures. I was especially fascinated at how Rush could use asymmetrical meters and make them sound and feel symmetrical. I started to notice the same trick being done in other commercially successful songs, like “Solsbury Hill” by Peter Gabriel and “Money” by Pink Floyd, both of which are in 7/4 time but lope along so casually that the listener never even notices.

I also gained a deeper appreciation for Neil’s lyric writing, and was fascinated that the drummer was the “voice” of this band. Especially “Entre Nous“, which features beautifully poetic descriptions of romantic love. Not the kind of thing you hear often in a Rush song!

Permanent Waves was huge influence on me as a music lover as well as a player, and it remains one of my favorite albums by Rush or by any band. And don’t worry … even though I did record the whole thing onto cassette from a radio broadcast, I still bought the LP as soon as it was released. 🙂 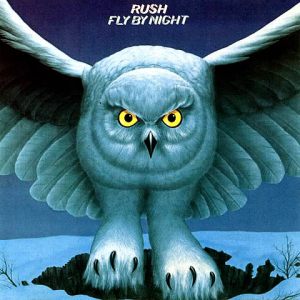 “Anthem”
“Best I Can”
“Beneath, Between, Behind”
“By-Tor and the Snowdog”
“Fly By Night”
“Making Memories”
“Rivendell”
“In the End”

My journey into the world of hard rock started when I got KISS’ Love Gun for my 15th birthday. It opened up a whole world for me. I became obsessed with KISS – all the albums released up to that point, posters all over my walls, action figures, lunch box, books, etc. I listened to them all the time. I drew pictures of them. I forced my parents into subscribing to a new cable service called HBO because they were going to be showing a KISS concert from 1976. At first my parents weren’t too keen on the whole thing, but they eventually got used to it and learned to embrace it, getting me tons of KISS stuff for Christmas.

Well, that just wouldn’t work. I couldn’t have my parents being okay with my formerly rebellious music choices, now could I? When I was first introduced to Rush, it was a friend who brought a copy of the Fly By Night  LP to school. The cover art was kind of cool, but the music was like nothing I’d ever heard before. There were songs that were more than 3.5 minutes. The lyrics were about weird stuff like Tolkien, demonic battles, and Ayn Rand. There was a darkness and a mysticism that I’d never heard in music before. More specifically, the drumming was extraordinary. Everyone knows Neil Peart now, but at the time, Rush was still a bit more underground. This guy played like nobody else; he didn’t just keep the beat, he contributed to structure and arrangement of the song. His playing was clean, intricate, powerful and – and this is the thing that most impressed me – musical. This guy was making the drums just as integral an instrument to the overall setting and interpretation of the song as the bass and guitar. And the fact that it was the drummer who was writing all these hyper-intelligent, poetic epics excited me.

I never learned to play quite like Peart, of course – my biggest drumming influence was still a few years away – but I did learn to think of playing drums in a different way. I also learned that songs could be about more than just love / relationship / party, etc. I began writing lyrics of my own. I wrote one called “The Black Warrior” which I wish I still had a copy of.

Soon after I borrowed Fly By Night from my friend, and I’d thoroughly absorbed it, I was loaned 2112. That shit blew my mind. An album that had a piece lasting an entire album side that told a long, complex story. That was absolutely new territory for me. I went bananas on this stuff. By this time, I was hooked on Rush completely. I got all the other albums, and was surprised by the shifts in style their music took. When Permanent Waves was released in 1980, it had a profound affect on me. It was like all previous phases of Rush folded in together. The songs were mostly shorter, and were pop-y and accessible, but retained the prog-y nature of the late 70s, with a couple of songs – “Natural Science” and “Jacob’s Ladder“ – being longer soundscapes that were big expansions of the band’s musical horizons.

Becoming a Rush fan led to my love of Progressive Rock. I inevitably became a Yes fan (more on that later), and eventually discovered other bands like Genesis, Moody Blues, ELP, Triumph, Dream Theater, Spock’s Beard, IQ, Renaissance (I discovered them very late in the game) and many, many others.

I followed Rush throughout their whole career, and their most recent album, Clockwork Angels, is one of their best, with that tour possibly the best one they’ve ever done. And it all started in ’79 with a loaner of Fly By Night. The best part was that after having gotten used to KISS, my family HATED Rush!!