One of the most influential films of all time, this is the quintessential “base under siege” story. A group of military personnel along with a “newspaper man” (as he’s repeatedly referred to) are sent to the north pole to investigate reports, by a team of scientists stationed there, of a crashed suspected UFO. The destroy the flying saucer but learn that it had an occupant, which has survived. It was, according to Wikipedia, the 46th most successful movie of 1951, but the most successful sci-fi movie, outselling both The Day the Earth Stood Still and When Worlds Collide (which we’ll take a look at next). Critics at the time weren’t too kind to it, but over the decades it has become regarded as one of the milestones in sci-fi cinema.

Upon rewatching this, the first thing I notice is that this film isn’t as slick or as stylish as The Day the Earth Stood Still. It feels rushed; there are numerous occasions where characters interrupt each other, or speak over each other, or simply all talk at the same time. The only times there’s a break in pace — and they’re brief — are transitional shots of the plane taking off or landing. What this does is ramp up the tension continuously by very gradually and very constantly increasing the pace but never letting the audience catch its breath. The first clear shot of the titular Thing is so

shocking because it comes so suddenly and is so right there. The best moment in the film!

Seeing this when I was younger, it just seemed like another monster movie. And look, when I was a kid, I was really only in it for the monsters. This film was never one of my favorites mostly because there’s so little monster in it, and when he does appear, he’s just a man in a suit (yes, I know, even Godzilla was just a man in a suit, but I was much more able to suspend my disbelief on that even before I knew that suspending disbelief was a thing). But what I’ve come to realize since then is that this is a direct reflection of the Cold War, post-Hiroshima atmosphere. This movie paints the scientists as the dangerous ones, the reckless ones, the ones who value information above even human life, while the military are the heroes, the level-headed sensible ones, the ones whose first duty is to protect citizens, not endanger them. This is a far cry from most sci-fi / horror films in which the military are the “shoot first, damn the consequences” types and the scientists are the “let’s reason with it types.” The interesting thing is that that’s exactly how 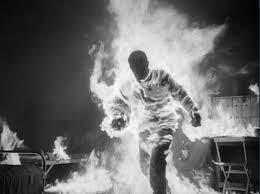 both sides are portrayed here, its just that the emphasis is different. Here, “reasonable” = bad and “kill it” = good.

The Thing From Another World doesn’t adhere closely to its source material, as is well known. We’ll have to wait until 1982 for that. Here, the monster is a humanoid shaped creature more in line with Frankenstein, who goes on a killing rampage. The twist is that he’s plant-based, and the speculation is that he’s there as an agent of either colonization or invasion (more or less the same thing when we’re talking about an already populated planet). His aggression hints at invasion, but to be fair, he was shot as soon as he woke up, which would sort of piss him off.

The cast is quite good, with a number of notable performers counted amongst it, such as William Self, who not only had a successful acting career but later became president of Twentieth Century Fox Television and produced hits like The Frank Sinatra Show, Time Tunnel, The Green Hornet and Sarah, Plain and Tall; and Kenneth Tobey, who had an extraordinary movie career, especially in his retirement years, when he 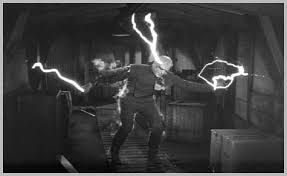 appeared in 80s classics like Gremlins, Airplane!, The Howling, InnerSpace, Big Top Peewee, Honey I Blew Up the Kids and many others.

To be perfectly honest, although it is a thoroughly enjoyable film, this still isn’t one of my faves. It seems not quite scientific enough to be science fiction and not quite scary enough to be horror. However, its place in cinematic history is undeniable, and many of the sci-fi/horror tropes that we all know originate here. It’s definitely a must-see, and a solid 90 minutes.