Dr. Beverly Crusher’s world is collapsing in on her. Quite literally. People she knows and loves are disappearing, and the remaining ones have no memory of their ever existing. As the crisis increases, and the entire ship’s complement is down to just her and Picard, she goes from worried to panicky to desperately and aggressively analytical. Gates McFadden gives a fantastic performance as a woman who is losing everything around her. This story was originally conceived as the B-plot to the episode “Family” (the one in which Picard returns to Earth after his ordeal as Locutus), but it was felt that a single episode would not accommodate both storylines, so this subplot was spun out as “Remember Me” and made into the fifth episode of the season. McFadden performed all her own stunts, discovering only shortly afterward that she was pregnant. 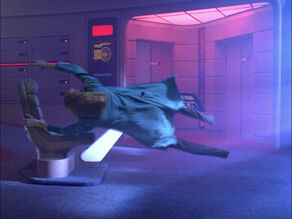 There are certain Trek episodes that might not be the best episodes ever made, or rank very highly on other people’s list, but I have a soft spot for, and this is one of them. I remember quite clearly when it was first broadcast how much fun I had watching it. As people start disappearing and you see Crusher’s reactions to each one, and the mystery increases, you find yourself pulled in. And the disappearances start to happen more quickly; even as she leaves sick bay with Troi, rounds a corner, and finds herself talking to no one. The clincher is that no one remembers the missing person except Crusher. In the conference room, she mentions Worf in passing, and the others are clearly confused. Picard interrupts her to ask “Whom did you say?” She tries to describe him to them: “Worf. Chief of Security. [pause] The big guy who never smiles? [pause] The Klingon!” No one knows of whom she speaks and are obviously a bit taken aback at the thought of a Klingon bridge officer.

At the end it comes down to just Crusher and Picard. The two are on the bridge and he is clearly humoring her with her wild stories. She challenges him: “It’s all perfectly logical to you, isn’t it? The two of us roaming about the galaxy in the flagship of the Federation. No crew at all.” “We’ve never needed a crew before” is his calm, rational response. But finally she reaches the end of her rope and she recounts all the people that are now missing in a really beautiful speech:

“Will Riker, your First Officer! He’s *very* good at playing poker, loves to cook; he – he listens to jazz music, plays the trombone … Commander Data, the android who sits at Ops. *Dreams* of being human. Never gets the punch line of a joke … Deanna Troi, your ship’s counselor, half-Betazoid, loves chocolate; the arrival of her mother makes you shudder. O’Brien, Geordi, Worf. Wesley, my son! They all have been the living, breathing heart of this crew for over three years! They deserve more than to be shrugged off, brushed aside, just pinched out of existence like that. They all do. They deserve so much more.”

And then, of course, Picard disappears as well and Crusher is alone. There are some really great scenes of Crusher, walking around empty corridors, poking her head in various rooms and finding no one. Her exchanges with the computer are interesting and at times humorous, as here:

Crusher: “What is the primary mission of the starship Enterprise?”
Computer: “To explore the galaxy.”
Crusher: “Do I have the necessary skills to complete that mission alone?”
Computer: “Negative.
Crusher: “Then why am I the only crew member?
Computer: ” . . . ”
Crusher: “Aha, got you there.”

Aside from so many dialogue triumphs, we are also given one of the most absurd lines ever written (the one I quoted at the top). Its so ridiculous it almost becomes believable in the ridiculous and stressful situation that Beverly finds herself in.

On the outside of Crusher’s contracting reality bubble, the crew — who have never gone anywhere at all, it’s her that’s disappeared — are trying

desperately to rescue her from the weird warp bubble before it destroys her. Showing up just in the nick of time to help out is The Traveler from Season One. To be honest, the Traveler is annoying and these parts of the episode are really rather mundane and unenjoyable, and I keep thinking, “forget all this nonsense, let’s get back to Beverly!” Luckily these scenes are kept to a minimum. But with the Traveler’s help they are able to rescue her, bringing to a close a delightfully fun episode.

The episode ends with a heartfelt reunion between mother and son. Only … my heart just ain’t feeling it. I’ve always wondered what the actual relationship between McFadden and Wheaton was like, because they are simply never able to sell a believable mother/son relationship on screen. I don’t know if its just no chemistry between two actors or if it’s something more. But for a genuinely believable parent/offspring relationship in Trek, one that jumps off the screening in a tender and touching way, you have to go to Deep Space Nine and the Sisko family.

After all these years, this is a great episode that is still, for me at least, a great deal of fun to watch.