A friend recently told me that I should be reviewing the new season of Doctor Who on my blog. Since he’s always right about everything, I guess I should give it a go. This first post will be sort of a catch-all of the first five episodes, and then I’ll jump into each individual subsequent episode as they air.

This season has been, so far, one of the best ones of the modern era. Solid storytelling featuring a perfect Doctor. Series 8 was very uneven, with stories ranging from bad to brilliant. This year so far has gone from strength to strength, with Capaldi settled very comfortably and authoritatively into his role as the Doctor. We’re back to 2-parters, which is exciting. And none of the soap opera elements from the past seasons! No dating, no relationship troubles, no divorcing, no having babies, no companions fawning all over the Doctor and pouting because he doesn’t return their sentiments, etc. Oh my gosh, its such a nice break! Has this season (as yet) produced any instant classics along the lines of “Blink,” “Midnight,” “Turn Left,” etc? No. But its been solid storytelling, with an exciting opening story with Daleks, an atmospheric and intriguing second story with “ghosts,” and a fifth episode that works as a standalone or as the first chapter in a story that introduces a character that we’ll be seeing again.

The Magician’s Apprentice / The Witch’s Familiar

The titles are nonsense, but the episodes were fabulous. This is possibly the best opening story of any of the modern seasons, with Part One definitely being the greatest opening episode. What a pre-title sequence! What a cliffhanger!! Really, its only competition is the “Impossible Astronaut” 2-parter, which was exciting and kept you guessing. This one is definitely on par with that, with the added bonus of “rock ‘n’ roll Doctor” and an extraordinary performance by Michelle Gomez. Like, I’m 100% a Delgado man, but I have to say, “Missy” is quickly becoming my favorite incarnation of the Master. She was zany and insane last season with a touch of Delgado’s scheming. This year there’s an extra layer of sinister on top of all of that. Gomez is perfect in the role. What’s amazing about the character is that she can’t even open what she suspects is a door (rather than an airlock) without it being a mindgame she plays with Clara, offering the threat of death. And of course she gets the single best line in the entire story: “20 feet.”  Her scenes with Jenna in the village square are riveting, and produced one of my favorite lines of dialogue: Clara says Missy loves the Doctor, and she replies “Oh don’t be disgusting; we’re Time Lords, not animals” with all her Time Lord haughtiness. She describes her friendship with the Doctor as “older than your civilization.” What a compelling notion. Once again we see a Dalek force combined of models from across their

timeline, something I’m a huge fan of. The last time this happened, the “classic” Daleks were little more than window dressing. This time, however … well, it was kind of the same, with them just milling around in room together. But at least they got some dialogue, and at least the first one we see, out on the surface with Missy and Clara, was a beautiful old model. Seeing Clara inside a Dalek casing again was a really excellent touch. But here’s one big question: Are we really supposed to believe that Davros has simply been keeping his eyes closed all these centuries? Really? Of course, that’s not the most unlikely thing in the history of Doctor Who cannon (anyone remember Guy Crayford?) But I’m very excited that the ending pretty much tells us that we’ll be seeing the Mistress and the Daleks again soon, and this time in cahoots with each other.

Under the Lake / Before the Flood 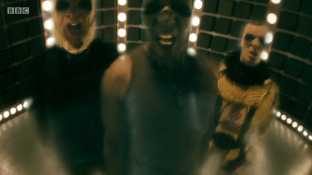 This was a wonderfully moody story, being both a “base under siege” thriller and a ghost story. We’re treated to an interesting setting peopled with very interesting characters. And another cracking cliffhanger! There may be people who will complain about so many 2-parters this year, but for me, cliffhangers is where Doctor Who is at. The story of an alien being that implants a set of coordinates into people, kills them, extracts their souls as “ghosts,” and uses them to broadcast those coordinates is just wacko, but so wonderfully inventive and entertaining. The Fisher King, however, I didn’t find to be an interesting foe, but that’s only because he was only on screen for one scene and we never really learn very much about him. There are some amazing moments throughout this story – Clara prompting the Doctor how to behave with a set of pre-written cards; the Doctor’s exuberance at the possibility of encountering actual ghosts; Cass being soundlessly stalked by a murdery and noisey ghost; Clara’s refusal to accept that the Doctor is going to die. Its a cracking story from beginning to end. My only gripe about it is the cold open to the second episode: The Doctor talking to camera about Beethoven. While I love guitar-hero Doctor, I found him giving a to-camera explanation awkward and unnecessary.

The Girl Who Died

When we first started seeing images from this episode in trailers, I was afraid it was going to be another “Robots of Sherwood,” an episode I thoroughly disliked. I was pleasantly surprised to find this to be a very enjoyable story with a superb performance by Capaldi and Coleman. They’ve really become a great team this year. I thought they had a great chemistry together last year, but too much time was spent on Clara’s rather unconvincing tryst with Danny Pink, and her lying to both Pink and the Doctor, and the tension between the Doctor and Pink. I’m so glad that all that rubbish is gone this season, and we’re left with a Doctor and a companion that work well together. The magical moment, of course, was the Doctor’s realization about what his face means to him. In no way do I think that an explanation has to be given every time an actor is seen in a second role, so I don’t think that there was any need for Capaldi’s character in “The Fires of Pompeii” to be revisited. Having said that, the scene was so beautifully played by Capaldi (and, side note, we got 5 seconds of Catherine Tate on screen!). And that moment led to a beautiful scene of the Doctor bucking the rules and saving Ashildr. This is essentially a repeat of the Tennant “Time Lord victorious” scene at the end of “Waters of Mars,” only this one is far more believably presented, and portrayed with a bit more subtlety, both in terms of action and direction.

The Woman Who Lived

Not exactly the second half of a 2-parter; this episode could have been shown anywhere within the season and would have still worked, and maybe it should have. Maybe we should have had Ashildr’s first episode, then the Zygon 2-parter, and then this one. This was a thoroughly engaging examination of the gift/curse of immortality. It was interesting to see Ashildr with little or no memories of her past, and that she reads her journals now and again for entertainment value. To be honest, this is my least favorite episode this season. And that says a huge amount about the quality of this season, that one’s least favorite is still a really good episode. I thought the fire-breathing lion man wasn’t a very interesting foe, and not very well developed or explained. And for two episodes in a row, the threat came from the sky in parting clouds. Was that a stylistic choice to thematically link the two episodes? Maybe. I am intrigued with what is planned for Maisie’s character down the road, but I think at this point its hard to introduce a character like hers, who will basically be a minder, and her not having been there over the past 10 years for people like Elton or the other members of LINDA, or Talullah and Lazlo, or whomever. But we’ll see where this goes. Who knows, maybe this will be the conduit for appearances by past companions. So not my favorite episode, but still a damn good one. And hey, anytime the Terileptls get a shoutout is all right by me!

4 thoughts on “Doctor Who: Reflections on Series 9 (so far)”